This article and my code on GitHub describes how to train models via IBM Watson Studio in the cloud or locally. After the training the models are optimized so that they can be deployed to various devices, for example iOS and Android based systems.

As example I picked a Visual Recognition scenario similar to my earlier blog entry where I described how to use TensorFlow.js in browsers. In order to train the model I’ve taken pictures from seven items: plug, soccer ball, mouse, hat, truck, banana and headphones.

Check out the video for a quick demo how these items can be recognized in iOS and Android apps. This is an iPhone screenshot where a banana is recognized. 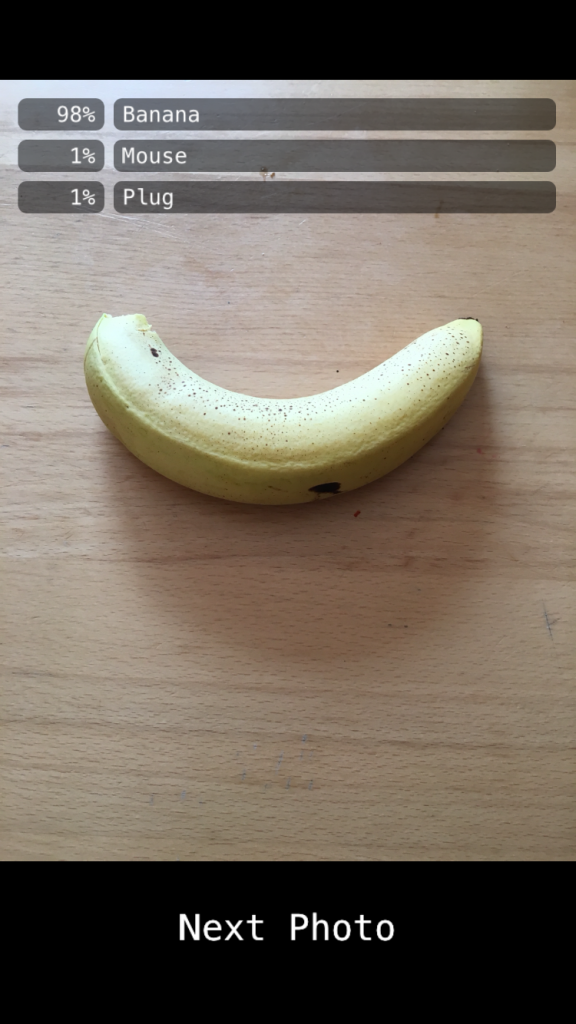 Google provides a nice and easy to follow tutorial how to train, optimize and deploy a visual recognition model to Android devices. I’ve tried to deploy the model to an iPhone and have run into some issues. Check out my project on GitHub how I’ve fixed those.

In order to run models on edge devices efficiently, they need to be optimized in terms of model size, memory usage, battery usage, etc. To achieve this, one method is to remove dropouts from the graph. Dropouts are used during training to prevent overfitting models. At runtime, when running predictions, they are not needed.

Another method to optimize models is quantization. Weights in graphs are often defined via floats. When using integers instead however, the sizes of the models are reduced significantly while the accuracy is only affected minimally or not at all.

In order to get the iOS camera sample working with the model that is generated in the tutorial, I had to do some changes. The integers had to be changed to floats when passing in an image to the graph:

After this predictions can be invoked in the Objective-C++ code like this:

If you want to run this example yourself, get the code from GitHub and get a free IBM Cloud account.