In order to find models, there isn’t the one place to go to. In my experience the best way to find models is to rely on Google searches. That having said, there are a number of websites though with lot’s of interesting open source models.

The IBM Model Asset Exchange doesn’t contain too many models yet, but I like the consumability for developers. As I blogged about, the models are put in Docker containers and predictions can be done via REST APIs. The models are published under open source licenses and the IP has been vetted. Some of the models can be re-trained easily with custom data.

As the name implies the TensorFlow Models GitHub project is specialized on TensorFlow. This catalog has a big amount of models and many different types of models. Many of the models are high quality and well documented, for example the visual recognition models. For some of the other models I’m not sure whether they are actively maintained. Also some of the models are not the trained models, but code to execute trainings of models.

The Caffe2 Model Zoo is another website you might want to check out when looking for models. There is a bigger number of visual recognition models available for Caffe and Caffe2. As a developer without much data science background however, I’ve found it sometimes hard to understand what these models do and how to use them.

The Open Neural Network eXchange Model Zoo is a collection of pre-trained, state-of-the-art models in the ONNX format. ONNX is an open format to represent deep learning models. ONNX was initiated by Facebook and Microsoft, IBM joined shortly after this.

There are several converters available to import ONNX models in frameworks like TensorFlow, CoreML and Caffe and vice versa converters to convert models from different deep learning frameworks into the ONNX format. This allows developers, for example, to convert models that cannot be run natively on mobile devices into formats that can be executed on mobile devices. Unfortunately I haven’t had luck to get a sample working so far, but I’ll keep trying as the different converters evolve. 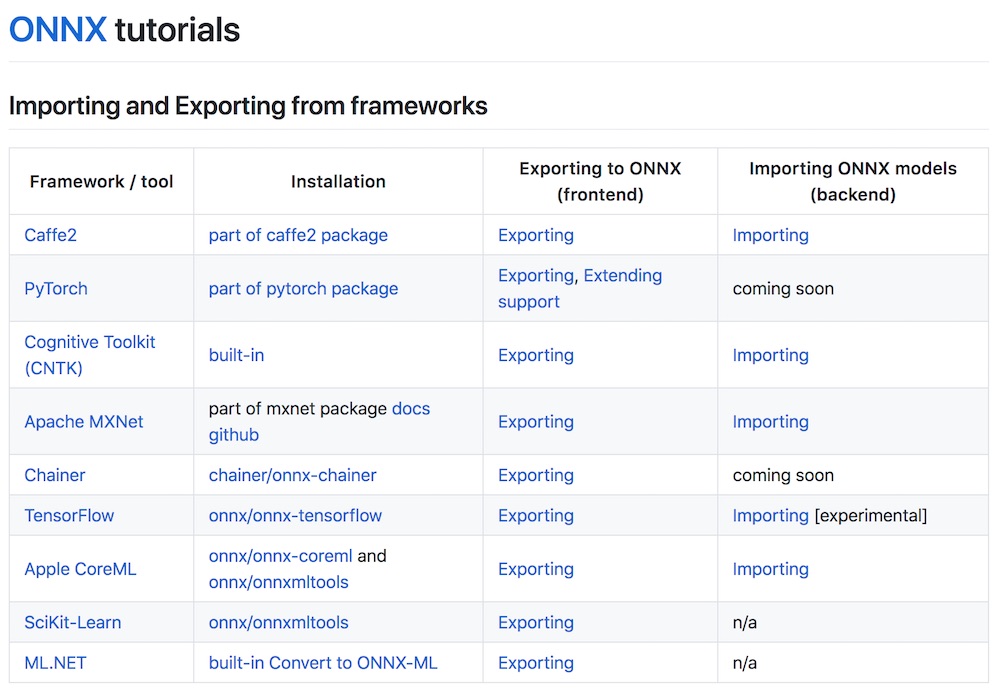