In my last blog entry I documented how to deploy Angular 2+ apps to Bluemix via the HTTP server nginx. All that server does it to host the static files. Below I describe how to use OpenWhisk actions for server-side business logic that can be invoked from Angular apps.

In order to avoid cross origin security errors proxy servers need to be used. Fortunately both the local web server that is installed via the Angular CLI and nginx can be configured as proxies.

I’m using the same simple app again from my last blog entry with one new button that triggers an OpenWhisk action. 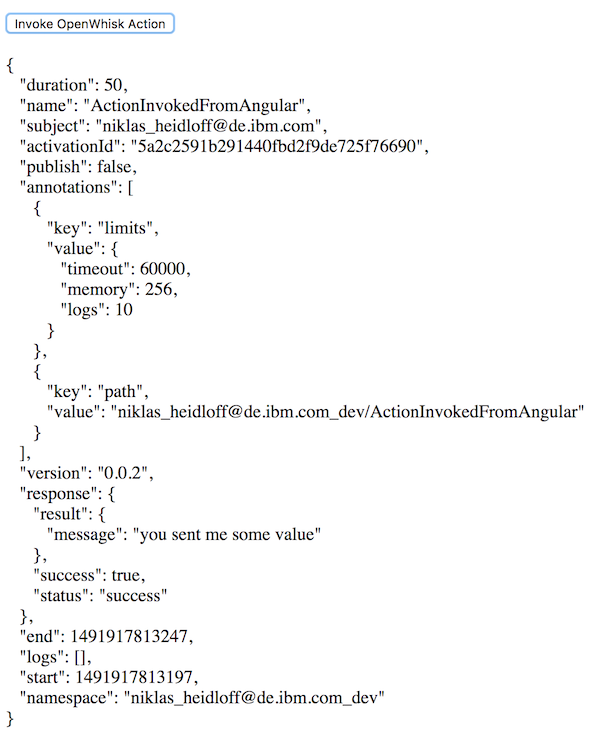 The file ‘app.component.html’ contains the button and displays the OpenWhisk result:

In ‘app.component.ts’ the OpenWhisk REST API is invoked. You need to copy your key from OpenWhisk and paste it in the code below. Please note that you shouldn’t put the credentials in your client side code for production apps since they would be easy to discover. Via Web Actions web applications can access anonymously OpenWhisk actions without requiring OpenWhisk authentication keys.

In order to use a local proxy change one line in ‘package.json’:

Put the proxy.conf.json in the project’s root directory so that you can run the app locally via “npm start”.

The configuration of the nginx proxy is already done in the previous blog entry in ‘nginx.conf’. You can deploy the app again via the following commands:

My Advice: Don't use Angular 2+ without Redux