Pictures from Bluemix at DNUG

This week I attended DNUG in Hamburg/Germany. DNUG is the German user group for IBM Collaboration Solutions. In the app dev track several sessions covered Bluemix.

It was the 43th conference of DNUG but this time it was very different. After years of declining numbers of attendees the new board has managed to double the number of attendees compared to the last conference. The new DNUG organization is now much leaner and cost effective. One example is that all servers and infrastructure has been moved into the cloud. The leaner organization has led to cheaper conference and membership fees. A big thank you from me goes to the new board: Daniel Reichelt, Erik Wüstner, Jörg Rafflenbeul and Stefan Gebhardt.

Another change is the clear commitment to IBM Collaboration Solutions and a close cooperation with IBM. One example is that requirements from all DNUG members were collected to give them more weight as opposed to reporting these requirements one by one and maybe ‘only’ by smaller partners/customers. I consider this a win win situation since IBM can benefit from DNUG as much as the other way around. Peter Schütt is DNUG’s main IBM contact and he has done a great job supporting the new DNUG over the last months.

The most important thing at conferences is obviously the content. I like the new DNUG process to define the agenda. Working groups have been defined for various topics with experts from the community as well as IBM. These experts define content, sessions and speakers for the specific topic for the main conference. Additionally the working groups organize at least one separate one day event per year. For example I had the pleasure to help in the app dev working group and there will be a one day app dev event in Düsseldorf at November, 24th.

Below are some pictures from the sessions that covered Bluemix.

Martin Donnelly explained in this session the XPages runtime on Bluemix which is now generally available. He also showed some new samples like the usage of Cloudant as a NoSQL datastore for XPages applications. There is a new sample application on OpenNTF that developers can use to learn how to integrate various Watson services in XPages. 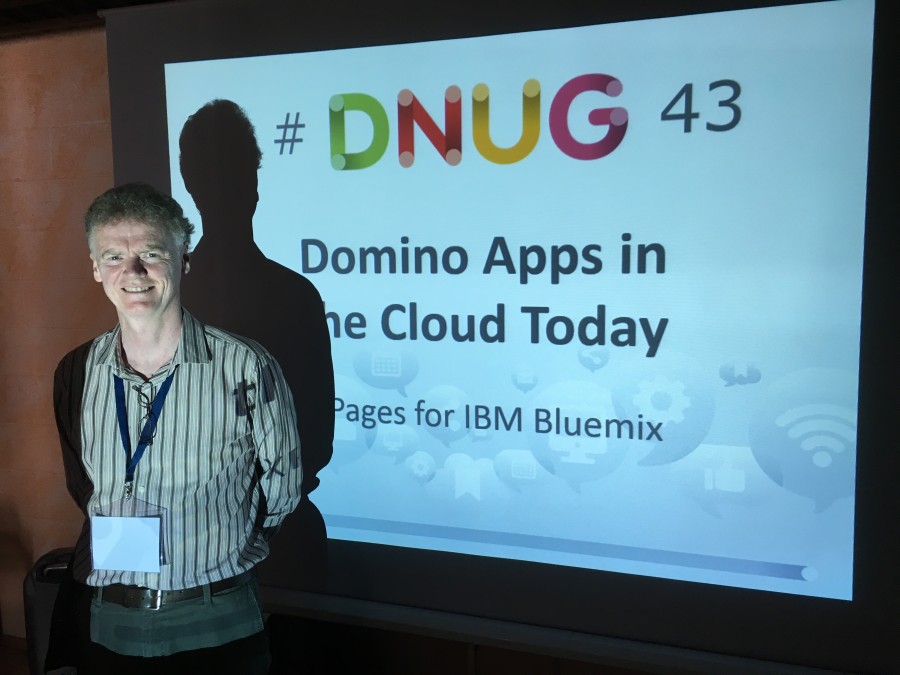 Hans-Peter Kuessner and Tim Bunkus talked in their session about how you can assemble Bluemix applications as simple as playing Lego. Specifically they demonstrated how to consume Watson services like the Visual Recognition service (see photo) and they demonstrated Node-RED to do things like web sockets that you cannot do easily in Domino. 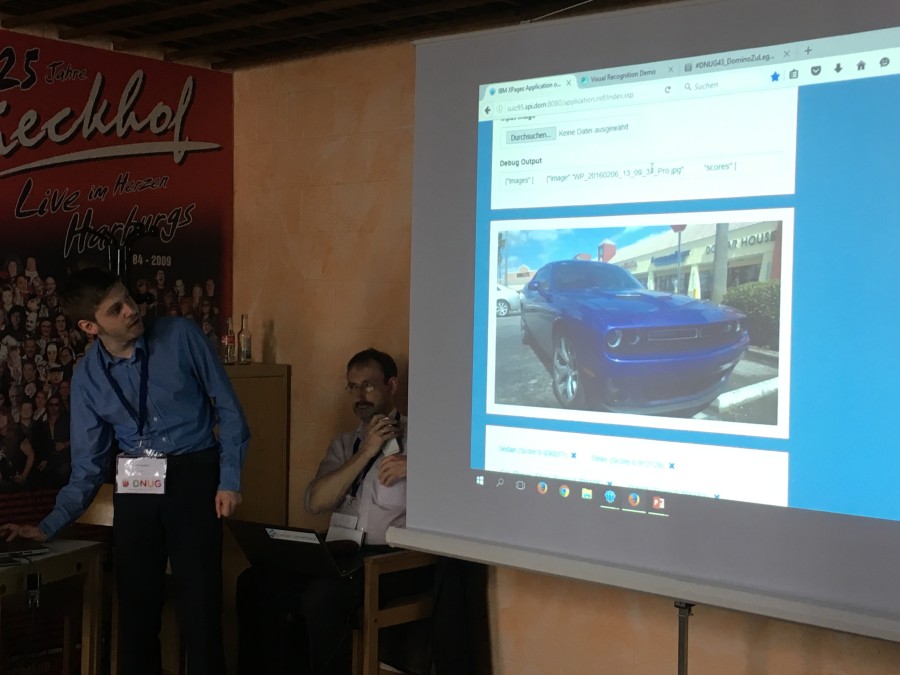 Matt White did a great introduction to Node.js. He didn’t have time to demonstrate how to deploy Node.js applications to Bluemix but he did talk about it and I saw him doing it at other conferences this year. 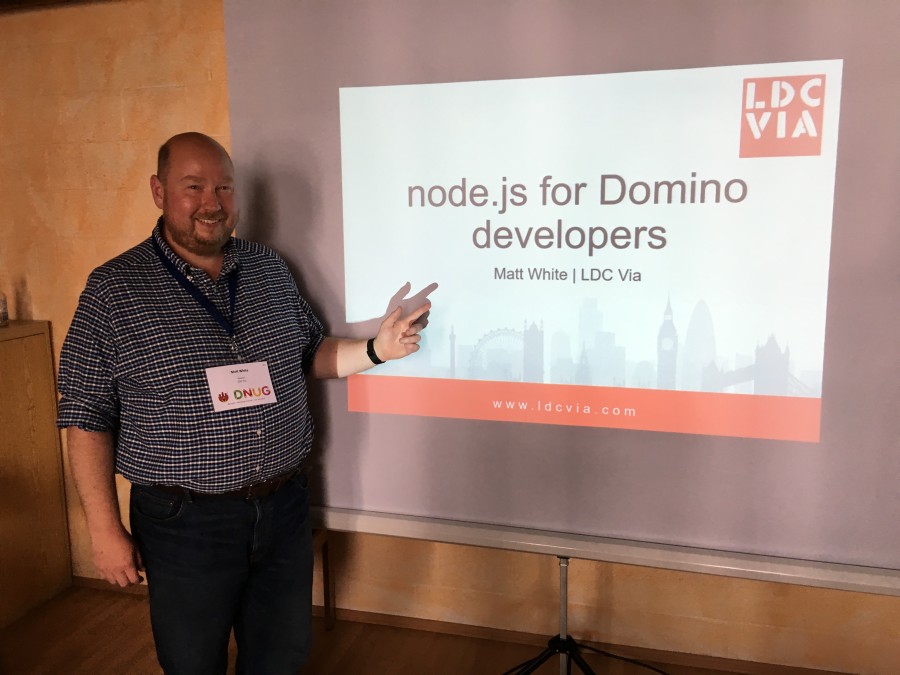 In my session I demonstrated how developers can use Node.js and Loopback to define declaratively business objects and generate REST API and provide persistence for these objects. The CLEAN stack can be used, for example, to build collaborative applications that leverage IBM Connections functionality. 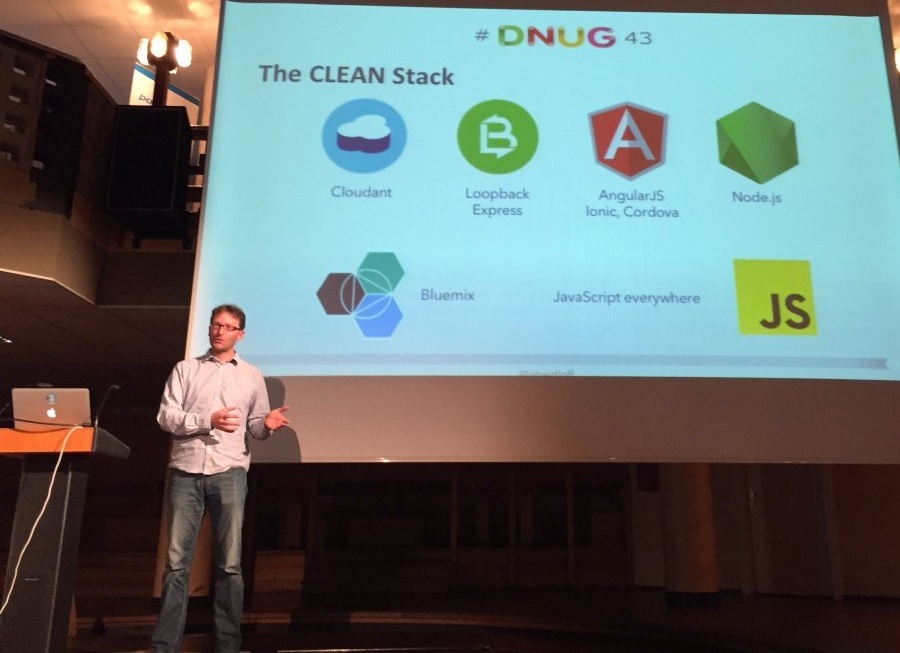