My Thoughts on the fifth OpenNTF XPages Development Contest

For the fifth time OpenNTF has hosted an XPages development contest which is part of the Appathon. This time we asked again for XPages based solutions and for the first time we asked for open source projects that leverage other modern IBM Domino application development capabilities like OSGi, REST, DOTS, etc. As a result we received submissions like an improved Java API for Domino, an FTP Server for Domino and an Android app for Domino discussions in addition to some great XPages controls and applications.

In total we received 20 submissions from 20 contributors including five people who had never contributed to OpenNTF before. Check XPages.info for a list of contributions. There are mini videos for most of the submissions. 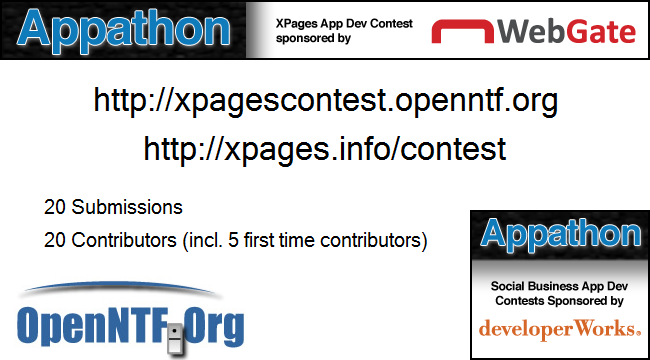 Over the last 2.5 years OpenNTF has received 145 contributions from 119 developers (including 53 first time OpenNTF contributors) for the five contests. As we could already observe in the last contests there is a trend that contributions get more and more sophisticated. Someone from the community told me recently that winning the OpenNTF contests has become a serious business.

Currently four people are doing the technical in depth pre-judging. I want to thank Christian Guedemann, Per Henrik Lausten and Frank van der Linden for their work since this judging is time consuming. As always Peter Tanner has done a great job to help people to get their submissions cleared. I also want to thank our sponsors WebGate and IBM developerWorks which allows OpenNTF to offer $5000 as prizes.

After the pre-judging the OpenNTF directors will do the final judging. Expect to see a blog entry from the OpenNTF chair Bruce Elgort soon.

And to repeat what I said about the previous four contests: There is one winner already – the XPages community.

Video: How to use the IBM Social Business Toolkit SDK from Java