My Thoughts on the fourth OpenNTF XPages Development Contest

For the fourth time OpenNTF hosted a development contest. I’m very happy with the outcome! The contest was a big success again with a lot of high quality submissions. The trend that we already observed in the last contest continued. The quality and the functionality of the projects gets better and better.

Since the judging is still going on, I won’t write about specific submissions yet, but I’ve planned to write another blog entry with some highlights later. For now you can check out the submitted projects yourself. XPages.info/contest lists all submissions including videos and screenshots. 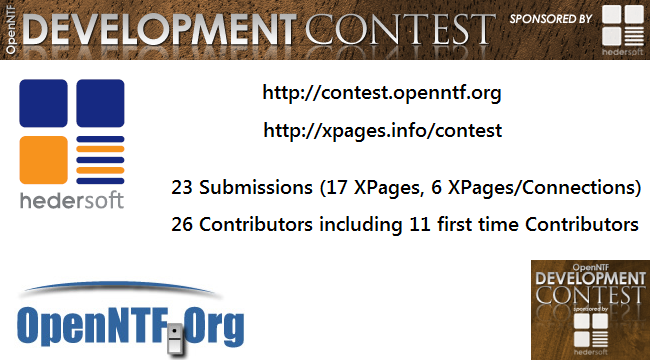 A big thank you goes to our sponsor hedersoft, specifically to Henning Schmidt and Lars Buntrock. They’ve been a long term OpenNTF partner and supported strongly the new Connections category. As Lars stated, he is “convinced that the development of social business solutions will soon be key for XPages developers”.

And I want to thank the OpenNTF board for defining the strategy and process of the contest, esp. the chairman Bruce Elgort and Peter Tanner who cleared in his role as IP manager the releases again.

The OpenNTF board of directors is now doing the final judging. Four technical XPages experts have already done the pre-judging: Corey Davis, Per Henrik Lausten, Christian Guedemann and Mark Leusink. I also want to thank them. They did an in depth analysis of all submissions using the contest criteria and that was actually a lot of work.

I’m afraid I sound like a broken record, but again: There is one winner already – the XPages community.

XPages in the Embedded Experience in IBM Connections