REST APIs in Bluemix.info implemented via JAX-RS and Apache Wink

Yesterday Ryan Baxter blogged about how to use Spring Boot to develop your own REST APIs. Sounds pretty good. When I implemented the REST APIs of Bluemix.info I didn’t know about this framework and chose instead JAX-RS and Apache Wink which is used by many Liberty developers. Below is an overview how to leverage these technologies to build REST APIs consuming and producing JSON. As a disclaimer this was my first time using JAX-RS.

JAX-RS is a specification of a Java API for RESTful Services. IBM WebSphere Liberty profile uses Apache Wink which is an implementation of this spec. In order to use Wink in your Java applications the first thing is to add the dependencies to your project. As a first time user it took me some time to find the right libraries. Check out pom.xml of the Bluemix.info project to find the libraries that work to implement REST APIs with JSON as data format.

Next you need to define the RestServlet in your web.xml and in the application file the list of all Java classes with REST implementations. All REST APIs of Bluemix.info can be invoked via “api/” in the URL which is the filter defined in the web.xml. The implementations of the REST APIs then define the rest of the path. For example the REST API to read curated news can be invoked via http://www.bluemix.info/api/curatednews.

After the configuration you can develop your APIs pretty easily. Check out the example API to add authors. 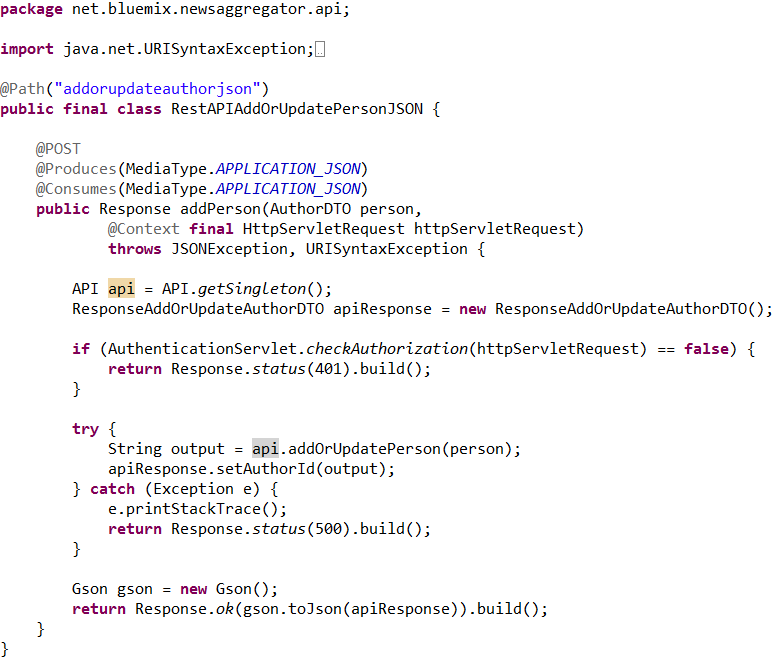 The API is declared to both consume and produce JSON. As an input parameter the method has the data transfer object AuthorDTO.
The nice thing is that the deserialization is done automatically by Wink. Make sure though that you use the wink-jackson-provider in your pom.xml since not all of the other providers support this.

In order to return JSON you can also use Jackson. Alternatively there are other libraries like google-gson to serialize Java objects into JSON.

In my next blog entry I’ll describe how I’ve documented the APIs via Swagger which are the other annotations you see in the code.

As a completely unrelated topic, yesterday I learned that you can define routes to your application without the “www”. So Bluemix.info is now also accessible via Bluemix.info. Since the Bluemix user interface doesn’t support this yet, you can use the command line interface, e.g. “cf map-route news-aggregator bluemix.info”.

Usage of the Cloudant NoSQL Service in Bluemix Info

Swagger used in Bluemix.info to document and invoke REST APIs