My Thoughts on the third OpenNTF XPages Development Contest

What a contest. So exciting, so many great submissions and so many contributors including first time contributors.

Check out all submissions with screenshots and videos here: http://xpages.info/contest

Why was it exciting? Well, 3.5 months after the contest was announced there were ‘only’ 16 submissions and only two of them for the applications category. Over the last two weeks however 14 more submissions came in including seven more applications. Plus it was very exciting to see one good submission coming in after the other. I was really amazed by the creativity of people and breadth of the different contributions. 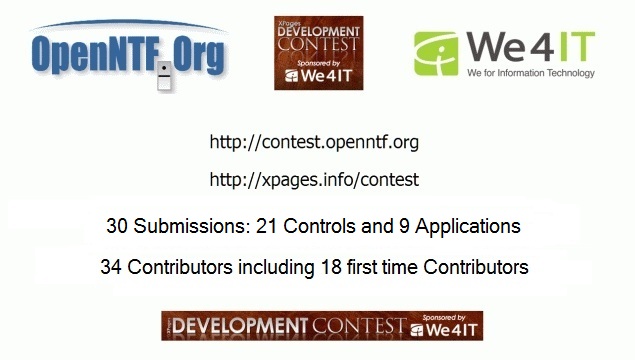 One of our goals of this contest was to increase the number of open source applications. We know however that contributing applications is much harder than controls or snippets. That’s why we doubled the cash prizes and increased the duration of the contest. Since we also liked the big amount of submissions and contributors from the first two contests, we introduced two categories, one for applications and one for controls.

In total developers submitted 21 controls and 9 applications. More importantly I think the quality is very good. There is a significant difference between this contest and especially the first contest. In the first contest there were also many good controls but some controls were more for XPages beginngers. In this contest developers didn’t submit these starter controls. Plus several simpler assets are being published as XSnippets for which OpenNTF has another ongoing contest.

Another development I’ve observed is that more companies got engaged. Some of the new companies in this contest are WebGate, Fujitsu Sweden, IT works unlimited, Oval business solutions and Maarga Systems.

I also want to thank our sponsor We4IT and personally the CEO Stefan Sucker. We4IT has now sponsored three contests. They were the first company interested in sponsoring these contests when we asked for it and have since then been a great OpenNTF partner/member.

And I want to thank the OpenNTF board for defining the strategy and process of the contest, esp. the chairman Bruce Elgort who as always has been there to make the tough calls. Additionally Peter Tanner has cleared in his role as IP manager the releases again and worked hard over the last days including last weekend.

The OpenNTF board of directors will do the final judging. Before this we have a first round judging where we do an in depth analysis of all submissions using the contest criteria. I’m happy that this time three well known XPages experts will do this with me: Declan Sciolla-Lynch, Per Henrik Lausten and Karsten Lehmann.

Now off to the judging – it’s gonna be really difficult again. But there is one winner already – the XPages community.

Observations from DNUG: Adoption of XPages